The VN-INDEX lost 5.4pts to end at 939.0pts, the first fall in nine sessions, due to the selling pressure from all sectors, despite the early trading rise. Following a positive performance on the U.S stock market the previous night, the VN-INDEX opened optimistically and quickly rose to its intraday peak of 948.2pts (+0.4%). The advance was mainly fueled by the Real Estate sector, with VRE, LGC, and VHM increasing 1.6%, 6.4%, and 0.3%, respectively. Furthermore, some market pillars joined the rally and further strengthened the existing upward momentum, led by BID (+0.8%) and VPB (+1.2%). However, as the session was nearing its end, profit-taking activities emerged and overwhelmed other large caps, thus pushing the VN-INDEX below the reference price level. Notably, VCB, CTG, and BVH from the Financials sector fell 1.7%, 3.3%, and 3.7%, respectively, and wiped a combined 3.1pts off the index. Other bearish large caps included GVR (-3.7%) and VIC (-0.5%). At the end of the session, the VN-INDEX edged down 0.6% to 939.0pts and the HNX-INDEX also lost 0.3% to 140.0pts. 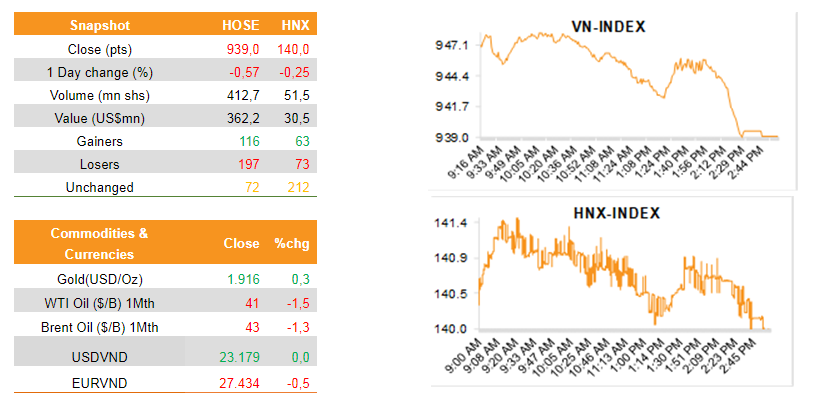 Oil dropped after an industry report pointed to a surprise increase in American crude stockpiles, countering optimism over a potential U.S. stimulus agreement. The American Petroleum Institute reported crude inventories climbed by almost 600,000 barrels, according to people familiar with the data. That contrasts with a stockpile decline forecast in a Bloomberg survey, before official data later on Wednesday. Brent crude futures were 1.6% lower on Wednesday, reversing all of the previous session’s gains that were driven by hopes of the American economic stimulus. (Bloomberg)

Vietnam’s leather and footwear on course for strong recovery

Viet Nam’s leather and footwear industry was on course for a strong recovery as more international fashion brands were valuing the country as an important part of the global supply chain, according to the Vietnam Leather, Footwear and Handbag Association (LEFASO). Phan Thi Thanh Xuan, vice-president of LEFASO, said many Vietnamese leather and footwear producers had secured enough orders to keep production running until the end of the year. This was due in no small part to the country’s successful effort to contain and fight off the COVID-19 pandemic. In addition, the country has become a popular destination for foreign investment after signing a number of historic trade deals such as the Comprehensive and Progressive Agreement for Trans-Pacific Partnership (CPTPP) and the EU-Vietnam Free Trade Agreement (EVFTA). A recent survey by LEFASO showed that more than 40% of international buyers said they were either placing additional orders or planning to do so in the near future.

Domestic firms, in light of the disruption caused by the pandemic and drastic falls in demand in traditional export markets such as the EU (-27%) and the US (-21%) compared with the previous year, were seeking new buyers and pushing for cost-cutting restructuring measures. As a result, Viet Nam’s localisation rate among leather and footwear producers has seen an improvement to average 30-40%, with key export products including sportswear and footwear up to over 50%. Statistics from the General Department of Vietnam Customs and the Ministry of Industry and Trade appeared to support the idea with export volume showing a strong recovery in September, posting a 4.5% increase from August and only a slight 0.4% decrease from the same period last year despite the ongoing pandemic.

Leather and footwear producers have also been recruiting additional workers as production starts kicking back into high gear. Free trade agreements and preferential policies, while giving some advantages for Vietnamese products, could not decide the outcome of the competition. Viet Nam’s leather and footwear industry was still struggling to deal with a host of problems, including its reliance on imports of raw materials and tightened labour regulations. Viet Nam has over 1,700 leather and footwear makers with a total production capacity of 1.1bn pairs of footwear, and 400m bags and backpacks a year. Footwear exports alone were estimated at US$12.8bn in the first nine months of the year, an 8.8% decrease compared to the same period last year, and only half of the industry’s target of US$24bn set for 2020. (Vietnamnet.vn)