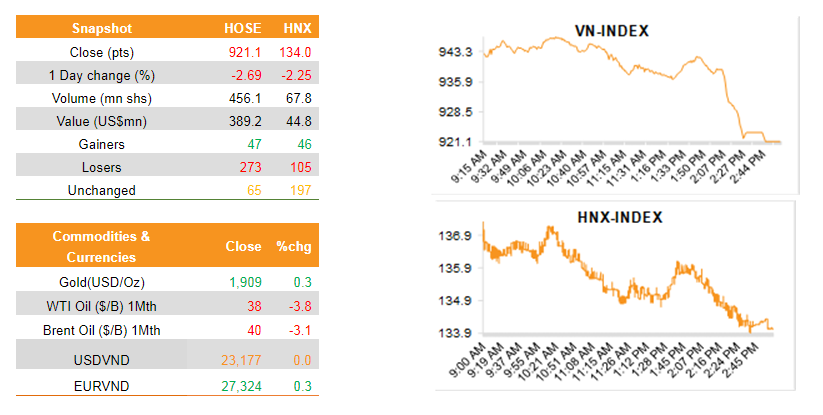 Oil slumps with equities as concerns rise over inventories

Oil fell sharply as an industry report showed a rise in U.S. crude stockpiles and stock markets in Europe came under pressure. Crude futures in New York fell 3.9%, while those in London retreated beneath US$40/barrel, the lowest since Oct. 5. European and U.S. equity markets also declined, while the dollar was stronger, souring oil sentiment on Wednesday. That came after the American Petroleum Institute reported crude inventories expanded by 4.58m barrels last week, while gasoline stockpiles rose for a second straight week, according to people familiar with the data. Official government figures are due later on Wednesday. (Bloomberg)

The mobile advertising market in Vietnam is expected to reach US$211m by the end of this year, according to the “Vietnam Mobile & Smartphone Application Report in the first half of 2020” released by Appota Group. Under the pandemic, the general advertising trend has become digital-focused as digital consumption skyrocketed. Average downloads per app in Vietnam reached 256,290, which was significantly higher than the global average of 154,794 downloads per app. In Vietnam, the cost-per-install (CPI) rate is relatively inexpensive and has shown a declining trend. Even with the effects of COVID-19, app usage and downloads have still been rising sharply.

The report also revealed that the number of visits to news sites increased dramatically in 1Q20, because Vietnamese people are regularly updated with news related to COVID-19 at the time of the pandemic. Specifically, general news sites traffic in 1Q20 increased to 44% from 28% in 4Q19, and financial enterprise news sites traffic also increased by 39% in the same period. Thanks to the increase in traffic, news sites have become frequently visited addresses and an effective advertising channel. (Vietnamnet.vn)

An opportunity in turbulent times

We expect Vietnam’s total air cargo volume throughput to rise 10.5% p.a. in FY21F-30F, driven by sustainable import-export growth and the combined benefits of FTAs and the relocation of supply chains from China to Vietnam. TIA in Ho Chi Minh City is the fastest-growing hub in the country; its Terminal 3 expansion project should lend a further boost.

Equipped to be the country’s leading air cargo services provider

We believe SCS’s air cargo volume market share in TIA should grow to 55% over FY21-30F period, transforming it into Vietnam’s leading air cargo services provider, premised on its state-of-the-art terminal and it being the only provider capable of expanding capacity at TIA. We expect SCS’s performance to remain robust given its efficient cost control, strong balance sheet with zero debt and a preferential 10% tax rate until FY23F.

SCS’s business would start to recover in Dec 2020F, when we believe a vaccine could become available according to World Health Organization (WHO) and the pandemic could be brought under control. We expect revenue/NP to dip 6.3%/5.8% yoy in FY20F.

While its sole rival Tan Son Nhat Cargo Services JSC (TCS, Unlisted) faces a capacity shortage, we believe SCS will be able to capitalise on TIA’s growth with 75% expansion of SCS’s current capacity by 2023F. We expect SCS’s international cargo volume to rise by an average of 10.6% p.a. in FY21-24F. We forecast 14.6% revenue CAGR and 11% net profit CAGR in FY21-24F.

Initiate coverage with Add and target price of VND144,500

SCS now trades at 11.9x FY21F P/E, far below its historical three-year average P/E of 14.1x. Our FY21-22F NP forecast is 14%/11% higher than consensus due to our higher expectations in the recovery of SCS’s international cargo volumes based on its technology competitive edge and its competitor’s capacity shortage in TIA.

Minh Phu Seafood Corporation (MPC VN, HOSE) – Dividend payment: MPC has set 10 Nov to be the record date for paying the cash dividend of VND1,500/share. The payment will be made on 26 Nov. (Ndh.vn)

Market Commentary: With substantially increased liquidity, the VNINDEX had a robust rally The VN-INDEX kept its upward momentum going throughout the day with the liquidity improved by roughly 30%, which contributed to the Index rising by 35.5pts to 1,268.4pts. US…

Market commentary: Sustaining an upward trajectory of VN-INDEX was made possible by VN Diamond stock basket With the primary support coming from VN Diamond, the VN-INDEX was able to keep its gaining momentum going throughout the session, and it finished…