The VN-INDEX lost 4.3pts due to selling pressure targeted on blue chips in late trading. After the opening bell, the market slightly recovered from the fall in Monday’s session thanks to the Financial sectors. However, the strong selling pressure continued to press on the index into the red territory. VHM was the top laggard today, falling 1.2% to end at VND77,600 and alone eroding the index by 0.8pts. Market pillars from Financial and other sectors also lost ground, including BID (-0.7%), MBB (-2.7%), STB (-5.7%), VNM (-0.8%), and VRE (-2.7%). Although VIC (+0.6%) and HPG (+2.0%) became the largest supporters, the market failed to come back to the reference level. At the end of the session, the VN-INDEX edged down 0.5% to close at its intraday low of 946.5pts and the HNX-INDEX also fell 1.4% to end at 137.1pts. 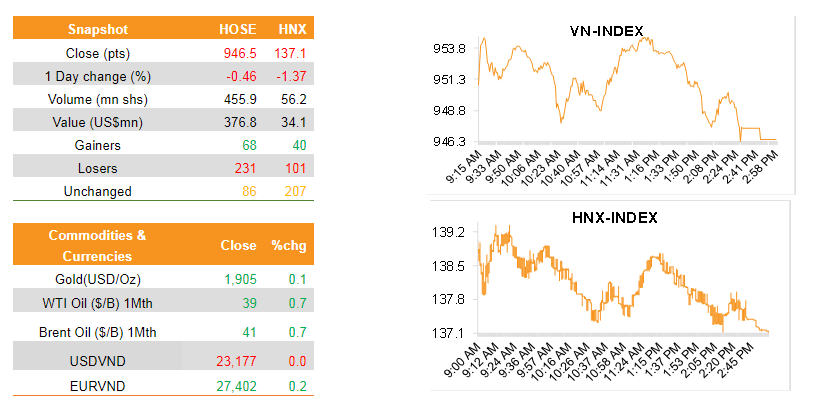 Oil clawed back some losses in New York as the dollar weakened, although rising Libyan production and fading hopes for fresh U.S. stimulus pointed to a bearish outlook for the market. Futures rose 0.8% after tumbling below US$39/barrel on Monday, with a weaker dollar boosting the appeal of commodities priced in the currency. Libya is set to restart the last of its major oil fields following a cease-fire in its civil war, moving the nation a step closer to boosting output to 1m barrels a day. (Bloomberg)

Vietnam was among four countries worldwide subject to the largest number of trade remedies from January to September 2020, according to the Ministry of Industry and Trade. The number of trade remedies imposed on Vietnamese goods in nine months doubled that of last year, with the most affected products being steel, aluminum, seafood, wood, and construction materials, which are also the country’s key export products. The Ministry of Industry and Trade is keeping a close watch on the export of key products, especially those that are being investigated or subject to trade remedies. The ministry has published a list of 13 at-risk products on its website and the list will be updated regularly.

As of late September, the ministry has reported 193 trade remedies on Vietnamese goods, including 108 anti-dumping cases, 22 anti-subsidy cases, 23 tax evasion cases, and 40 safeguard cases. 62% of the cases were from the United States, the EU, India, Canada, and Australia. Speaking to Thanh Nien newspaper, director of the Trade Remedies Authority of Vietnam Trieu Dung noted that trade remedies have affected Vietnamese goods worth some US$12bn since the first case was reported in 2003. Vietnam has appealed successfully in 65 of the cases. According to an international trade expert, the increase in the number of trade remedies is understandable in the context of the rising protectionism worldwide and it is also proportional to Vietnam’s import and export revenue. Trade remedies are a tool to protect domestic production and, as such, Vietnam is imposing trade remedies on the fertilizers, steel, and other products of several countries. (Vietnamnet.vn)

Danang Rubber JSC (DRC VN, HOSE) – Dividend payment: DRC has set 24 Nov to be the record date for paying the cash dividend of VND500/share. The payment will be made on 14 Dec. (ndh.vn)