We would like to send you our Daily Market Recap for today.

Market Commentary: The VN-INDEX lost 10.5pts in the last minutes 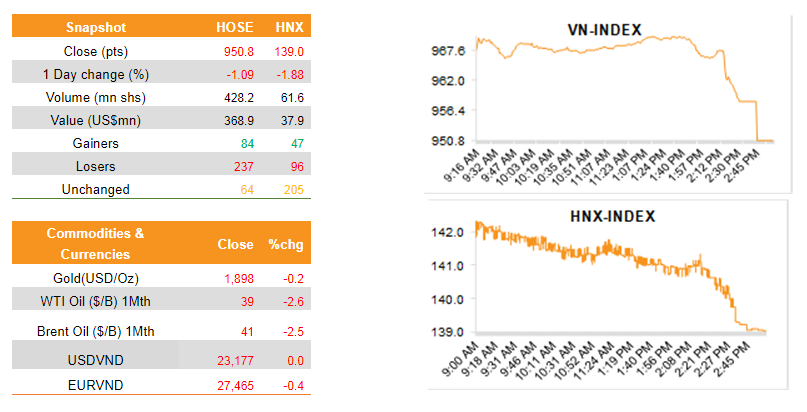 Oil plunges below US$39 on surging virus and stimulus stalemate

Oil extended its slide to a second day on a toxic cocktail of surging coronavirus cases in the U.S. and Europe, dwindling prospects for pre-election stimulus in Washington and a steady resumption of supply from Libya. Futures in New York fell almost 3% to drop below US$39/barrel. The U.S. reported record infections for a second straight day, while Italy approved a partial lockdown and Spain announced a national curfew. Democrats and Republicans accused each other of “moving the goalposts” in interviews on CNN as hopes for a deal before next week’s election appeared to be in tatters. The worsening demand outlook is coinciding with Libya’s push to almost double crude output, which is gaining momentum as rival sides prepare for a new round of talks aimed at ending a nearly decade-long conflict. A force majeure has been lifted on the Ras Lanuf and Es Sider ports, and the country’s state oil company said output would surpass 1m barrels a day in four weeks. (Bloomberg)

Private corporate bonds raised in September dived from the previous month after a decree took effect to tighten the issuance on the corporate bond market. Data from the Hanoi Stock Exchange (HNX) showed the total value of corporate bonds sold in September was VND16.25tr (nearly USD700m), news site ndh.vn reported. September’s value nosedived 80% from August’s record of VND83.8tr and was still modest compared to the March-July period. Between March and July, local companies issued an average of VND30.3tr worth of bonds, ndh.vn reported. In September, banks’ issuance accounted for 80% of the total sold value, which was VND13.17tr. The Vietnam International Joint Stock Commercial Bank (VIB) topped the market as it sold VND3.5tr worth of bonds in September. Orient Joint Stock Commercial Bank (OCB), the Vietnam Bank for Agriculture and Rural Development (Agribank), and Sai Gon-Hanoi Joint Stock Commercial Bank (SHB) issued VND2tr each. Among non-banking companies, SAM Holdings was the biggest bond issuer, raising a total VND300bn worth of bonds. The bonds were due in 24 months at an 11% annual interest rate. Bonds were backed by 24m shares of Binh Duong Production and Trading Goods Corporation (UPCoM: PRT) and 20m shares of Phu Tho Tourist Service JSC (UPCoM: DSP). On September 1, Decree 81/2020/NĐ-CP took effect to restrict risky purchases of corporate bonds to make the bond market stronger and more sustainable. (Vietnamnet.vn)

Non-II was VND8,771bn (-4% yoy) in 9M20, mainly driven by a 34% yoy decline in net other income to VND1,865bn in 9M20, from VND2,817bn in 9M19, as bad debt collecting activities contracted amid the prevailing economic headwinds. Furthermore, net fee income was only VND3,540bn in 9M20, making up just 45% of our full-year forecast, due to lacklustre bancassurance activities.

Reiterate Hold with a higher TP of VND89,200

Our higher TP is derived from an equal weight of residual income valuation (COE: 13.0%; LTG: 4.0%) and the rolling forward of our P/BV valuation to FY21F (2.8x). Downside risk: lower-than-expected credit growth. A shorter period of booking the upfront fee, thereby lifting FY20-22F earnings, is an upside risk.