The VN-INDEX closed up 0.2%, having extended its gaining streak to the sixth session, but large caps diverging put a lid on the gain. Shortly after the opening gain, the VN-INDEX gradually slumped to its intraday low of 984.9pts (-0.9%) as selling pressure dominated on several large caps. Specifically, VNM became the largest laggard and declined 0.9%, alone wiping 0.6pts off the index’s gain. Other bearish large caps included GAS (-1.2%), BID (-1.0%), and MSN (-1.3%). However, toward the end of the trading session, the VN-INDEX rebounded strongly and closed up as Real Estate large caps lent strong support. Notably, VHM jumped 4.0% to VND83,800 and alone added 2.9pts to the index’s gain. Other Real Estate large caps joined the rally, including VIC (+0.2%) and VRE (+0.9%). The advancers surpassed the bearish large caps. Foreign investors also had a very positive trade and net bought the fifth consecutive session on HOSE. As a result, the VN-INDEX gained 1.6pts (+0.2%) to end up at 995.8pts, while the HNX-INDEX lost 0.6pts (-0.4%) to close at 147.6pts. 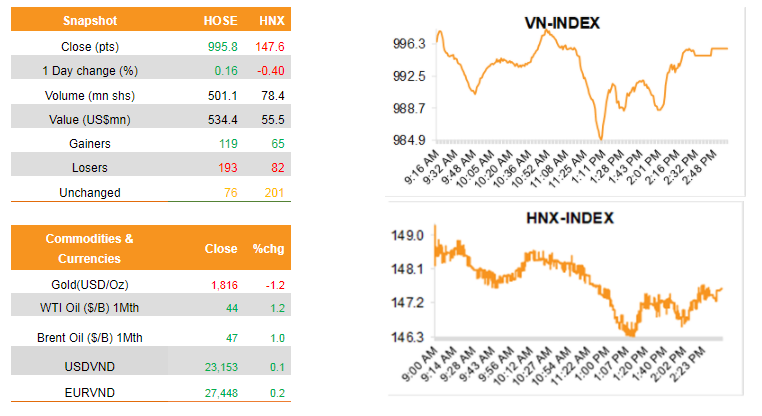 Oil traded at its highest level since March as markets broadly rallied on the start of the U.S. presidential transition process and with the demand outlook strengthening after a string of positive vaccine breakthroughs. Brent futures rose as much as 1.4% in London, accompanied by a sharp rally in the shape of the futures curve as physical markets in Asia showed signs of strength. The triggering of a formal transition process to U.S. President-elect Joe Biden buoyed stock markets and pushed down the dollar on Tuesday. With coronavirus vaccines appearing more likely in recent weeks and crude demand in Asia soaring, the gains in the shape of the oil futures curve have been even more stellar than the almost 24% rise in Brent prices so far this month. The international benchmark’s nearest contract moved to a premium to the next month on Monday for the first time since July — a bullish structure known as backwardation that indicates tight supply. (Bloomberg)

HCM City authorities plan to offer competitive land rents and other incentives at industrial parks (IPs) and export processing zones (EPZs), and earmark more lands for building infrastructure to attract investment. Hua Quoc Hung, head of the HCM City Export Processing and Industrial Zones Authority (HEPZA), said the city would switch to newer models of IPs and EPZs to attract investment, ensuring it has appropriate incentives during the transition process. There are 17 IPs and EPZs in the city, and they have an occupation rate of 68%, according to Hung. Only 120ha is available to investors in 2021 compared to 500-600ha a year in the last five years. The city has sought the Government’s approval for a 380ha IP​​ in Binh Chanh District, a specialised one prioritising innovative start-ups and producers and distributors in new industries. The city is expected to have 23 EPZs and IZs with a total of 5,797.62ha in future. In future HCM City would have to compete with other provinces, and so its industrial parks would need to improve their efficiency, he added. More than US$591m were invested in the city’s EPZs and IPs in 10M20, a yoy increase of 7.2%, according to HEPZA. Foreign investment accounted for US$270m, a 19.1% decline. Some 89.4% of fresh foreign investment, or US$81.2m, was in the services sector, and it was followed by machinery, electronics, plastics, and rubber. Domestic investment increased by 47.6%. There were 46 new projects with a capital of VND5.8tr (US$251m). Hung attributed the decline in FDI to the impacts of the Covid-19 pandemic and the restrictions on travel. The new investments went mainly into building factories and warehouses for rent, he said. Many investors had expressed interest in investing in warehouses and high-rise factories, he added. The city expects to receive a wave of investments post-pandemic when US, European and Japanese investors move their production lines to Vietnam. Last year it had attracted US$8.3bn worth of foreign investment. (Vietnamnet.vn)

3Q20 results were lower than our expectation

LTIA officially put on the table

Reiterate Add with a higher DCF-based TP of VND88,200

We cut FY20-22F EPS forecasts by 9.0-22.8% to reflect lower traffic assumptions and lower net financial income. We lift our DCF-based TP to VND88,200 due to 1) lower total EBITDA of FY21-FY30F to factor in mid-term cash burn period, 2) WACC decreased from 12.56% to 8.9% to reflect higher debt/equity, and 3) increased LT growth rate from 4% to 4.5% to represent better growth potential after FY30F due to LTIA. Downside risks include 1) a longer-than-expected Covid-19 pandemic, 2) slower-than-expected construction of LTIA. Re-rating catalyst is faster than expected Covid-19 vaccine development and distribution.