Market Commentary: The VN-INDEX reached highest level in 2020 with 0.4% rise 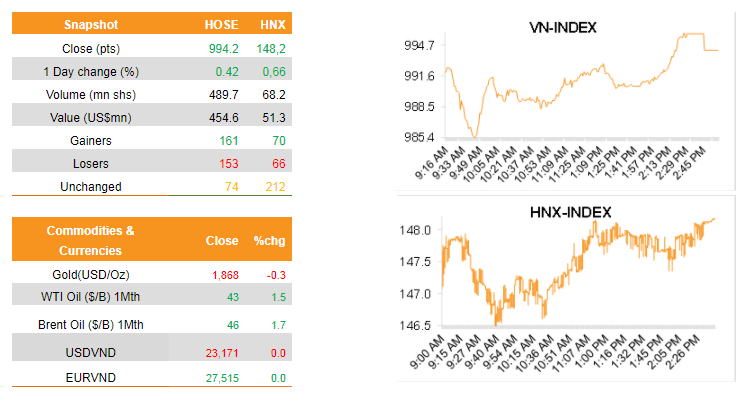 Oil pushed higher after closing at the strongest level since early September as signs that Covid-19 vaccinations in the U.S. could be underway within three weeks improved the demand outlook. Futures in New York rose past US$43/barrel after capping their third straight weekly gain. Vaccinations will “hopefully” start as soon as Dec. 11 or Dec. 12, Moncef Slaoui, head of the American government’s Operation Warp Speed vaccine acceleration program, said on CNN on Sunday. (Bloomberg)

The two-way trade turnover increased sharply from US$117m in 2017 to US$200m in 2019. Vietnam and Oman will continue to maintain the comprehensive development of various fields, including diplomacy, investment, trade, and tourism, through the annual meetings of the Vietnam-Oman Intergovernmental Cooperation Committee, said Oman’s Ambassador to Vietnam Saleh Mohamed Ahmed Al Suqri. On the occasion of the 50th anniversary of the National Day of Oman on November 18, the ambassador of Oman said that since the bilateral relation was established in 1992, the two countries had made a number of remarkable achievements in trade. The two-way trade turnover increased sharply from US$117m in 2017 to US$200m in 2019. The two countries are negotiating and finalizing some agreements to further promote bilateral ties. With the traditional friendship and long-term cooperation, Vietnam and Oman have been potential strategic trade partners of each other. Also, the two countries always support each other to maintain their positions in Southeast Asia and the Middle East, as well as in the global market, said Saleh Mohamed Ahmed al Suqri. Earlier in March 2018, Minister of Industry and Trade Tran Tuan Anh and Oman’s Minister of Commerce and Industry Ali bin Masoud bin Ali al Sunaidy signed a cooperation agreement between the two countries. Since the signing, many trade and investment projects have been initiated, raising total bilateral import and export turnover over the past few years. Besides, after more than 10 years of establishment, the Vietnam-Oman Investment (VOI), a joint venture between the Oman Investment Authority and the State Capital Investment Corporation of Vietnam, invested some US$300m in Vietnam, focusing on some sectors such as hi-tech agriculture, infrastructure, water treatment, renewable energy, pharmaceutical and healthcare, and education. (vietnamnet.vn)

Moving into FY21F with confidence

FPT’s 10M20 earnings in line with our expectations

For FY21F, we expect the pandemic situation to improve with the availability of vaccines. As a result, we forecast FPT’s FY21F revenue and net profit to grow by 17.1% and 20.3% yoy, respectively. We believe FPT’s GPM will further improve on the back of the higher proportion of the Dx business line in technology revenue. In particular, FPT’s blended GPM will gain 0.3% pts to 39.5% in FY21F, in our view.

Our higher TP is based on a sum-of-parts methodology and derived from an unchanged P/E-based multiple approach rolled forward to FY21F for its three main business segments. The multiples are extracted from the regional FY21F P/E median corresponding to each segment with discounts given the difference in interest rates between countries. We hold our positive stance on FPT’s long-term outlook, especially when the pandemic blows over.

Potential re-rating catalysts are a successful M&A deal with an overseas technology company and higher-than-expected signed IT services revenue. Downside risks include shortage of high-quality IT personnel to achieve the company’s long-term strategies and fewer technology contracts if the pandemic prolongs.

The worst time may be behind

S&LB, abnormal financial income and other income to save FY20F profit

FY21-22F outlook is enlightened by the vaccine announcement

Reiterate HOLD as positive factors have been priced in

We raise our TP by 13.9% on the back of: (1) upward revision in FY22F EPS forecasts onwards following higher domestic traffic growth assumption and (2) we roll forward our DCF valuation to FY21F. Upside risk includes higher-than-expected international traffic recovery since FY21F. Downside risk includes (1) uncertainties arising from the pandemic and (2) higher-than-expected fuel price.