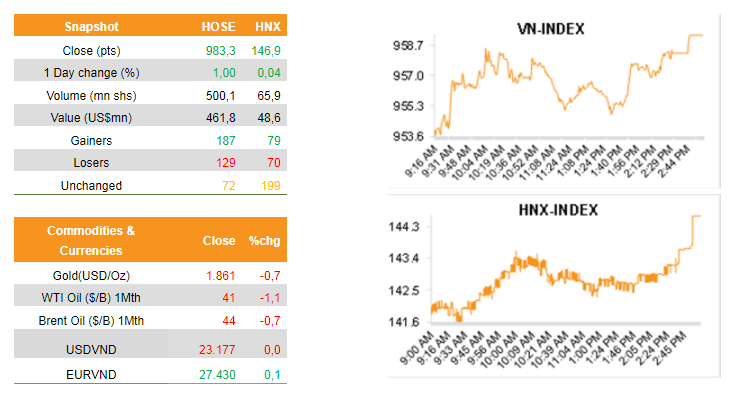 The United Arab Emirates ratcheted up tension with oil allies in OPEC+, with officials privately questioning the benefits of being in the producers’ alliance and even considering whether to leave it. The UAE has not said publicly it’s debating its membership, let alone planning to exit. And officials briefed the media under condition they would not be named, allowing room for maneuver if they later want to distance themselves from the comments. (Bloomberg)

At a time when the Covid-19 pandemic is causing severe impacts on the global economy, trade tensions among economies have escalated and resulted in excessive use of trade protection measures. As import tariffs are gradually removed under commitments to free trade agreements (FTAs), more trade probes against Vietnamese products are set to emerge and put local enterprises at risk. According to statistics from the Ministry of Industry and Trade (MOIT), as of September, the agency has recorded a total of 193 trade probes against Vietnamese goods in the forms of anti-dumping, anti-subsidy, among others, in turn affecting a trade turnover of nearly US$12bn. The MOIT informed 62% of the trade probes against Vietnam’s exports are from the US, India, the EU, Turkey, Canada and Australia. Meanwhile, ASEAN countries have also been active in adopting trade protection measures against Vietnamese products, accounting for 20% of the total. As protectionism remains a popular approach for many countries around the world, enterprises should look to diversify their export markets and strive to compete with others based on product quality instead of prices. More importantly, enterprises need to consider potential trade protection measures as part of their business strategies, while strictly following rules of origin and refraining from committing origin frauds during trading processes. (Vietnamnet.vn)

Market commentary: The VN-Index had a miraculous V-shaped recovery session The market experienced a volatile day, with the index closing up by just 1.3pts at 1,198.9 following a strong afternoon rally and heavy selling pressure in the morning. Global equities…

Market commentary: Today, VN-Index was under correctional pressure After a string of significant increases, the VN-Index was under selling pressure in the majority of sectors and closed at 1,218.1pts, unchanged from the previous session. A sharp decline in tech stocks…

Market commentary: The VN-Index had its second consecutive session of gains VN-Index continued to sustain the upward momentum with support from most groups, particularly Banking, Securities, Real Estate, and Oil & Gas, ending the session the Index increased by 15.3pts…