Market Commentary: The VN-INDEX rose 0.5% while awaiting the US Election final result.

The VN-INDEX recorded its fourth consecutive rise of 0.5% on the back of Financials and Utilities large caps. Following the positive rally from the U.S. stock market, VNINDEX optimistically began the session in the green territory with support from Financials and Utilities large caps. Notably, GAS rose 2.4% to VND71,900, alone added 0.9pts to the index, followed by other Utilities large caps to strengthen the index’s gain, namely PLX (+1.0%). Other Financials large caps also joined the rally of CTG (+1.3%), BID (+0.9%), HDB (+3.5%). On the downside, selling pressure forced several large caps to fall, including VIC and REE that dropped 0.9% and 0.7%, respectively. At the end of the session, the VN-INDEX ended up 0.5% at 939.8pts and the HNX-INDEX also rose 1.1% to 140.0pts. 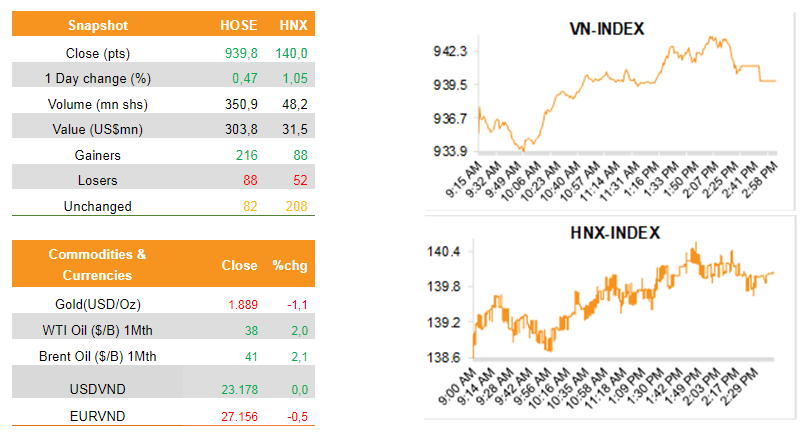 Gold and copper slumped while oil rose with U.S. equity futures, as tight races in battleground states in the U.S. election raised the prospect of a prolonged wait for the final result. Most commodities were dragged lower as the dollar rallied, with the unexpected closeness of the race sparking risk aversion across financial markets and spurring a flight to the safety of the greenback. President Donald Trump has once again defied polls and predictions, with a better-than-expected showing that appeared to significantly shrink Democrat challenger Joe Biden’s path to victory. The incumbent falsely declared early Wednesday he had won re-election and said he would ask the Supreme Court to intervene. Biden didn’t concede defeat and it looked likely that the final result would not be known for some time. (Bloomberg)

Rents for industrial lands in HCM City and Hanoi have increased by two and 1.7 times respectively in the third quarter from a year earlier. In HCM City, some industrial parks that rented land at US$150 per square metre for a 30-45-year lease term now want US$300. In Dong Nai Province, the rents for industrial lands have increased from US$110 to US$200. In some provinces in the north, rents have risen though not by as much as in the south. In Hanoi, for instance, they have increased from US$155 to US$260, while in Bac Giang Province they have gone up from US$55 to US$110. Experts said increasing investment by the Government in transport infrastructure, effective handling of the COVID-19 pandemic and US-China trade tensions have encouraged manufacturers to look to Vietnam as an investment destination to diversify their supply chains. Since the country’s economic reopening after the COVID-19 pandemic was put under control, industrial land for lease has been a key source of business. To meet the increasing demand of the market, in the north, some industrial land areas such as Bac Giang, Thai Nguyen, and Nam Dinh have been re-planned. There are 279 industrial parks in the country with occupancy of 71.1%, which have created 3.83m jobs, according to the Ministry of Planning and Investment. (Vietnamnet.vn)