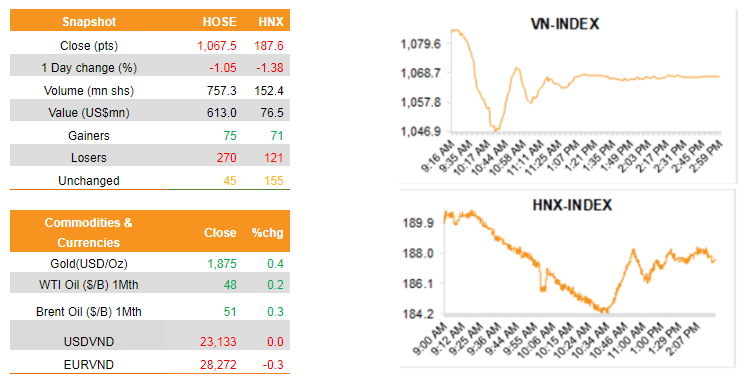 Oil was poised for its first weekly loss since October as the discovery of a potentially faster-spreading variant of Covid-19 in the U.K. raised the risk of more energy demand-sapping lockdowns. Futures in New York edged higher Thursday, but are down around 2% this week near US$48/barrel. Tougher restrictions were imposed across a large swath of England in an effort to rein in the mutant strain, which has alarmed scientists and governments around the world because early analysis suggests it may be as much as 70% more transmissible than other circulating strains. (Bloomberg)

The Ministry of Industry and Trade yesterday launched the Vietnam Free Trade Agreement Portal (FTAP) to help the domestic business community make the most of the opportunities brought about by trade deals to which Vietnam is a party. The launch was attended by Deputy Prime Minister and Foreign Minister Pham Binh Minh, World Bank Country Director for Vietnam Carolyn Turk, and Ambassador of Australia to Vietnam Robyn Mudie. The portal, at fta.moit.gov.vn, the first in Vietnam, has been developed by the MoIT and the World Bank, with support from the Government of Australia, since February 2019. It provides a smart online look-up tool for enterprises and others who wish to explore various FTA commitments regarding import duties, rules of origin, and services and investment. It also offers information and knowledge essential to foreign traders, such as market updates and local regulations on imports and exports as well as sustainable development. (Vietnamnet.vn)

Vietnam Engine and Agricultural Machinery Corporation (VEA VN, UPCOM) – Dividend payment: VEA has set 5 Jan 2021 to be the record date for paying the 2019 cash dividend of VND5,253/share. The payment will be made on 5 Feb 2021. (Ndh.vn)

Market commentary: The VN-Index had a miraculous V-shaped recovery session The market experienced a volatile day, with the index closing up by just 1.3pts at 1,198.9 following a strong afternoon rally and heavy selling pressure in the morning. Global equities…

Market commentary: Today, VN-Index was under correctional pressure After a string of significant increases, the VN-Index was under selling pressure in the majority of sectors and closed at 1,218.1pts, unchanged from the previous session. A sharp decline in tech stocks…

Market commentary: The VN-Index had its second consecutive session of gains VN-Index continued to sustain the upward momentum with support from most groups, particularly Banking, Securities, Real Estate, and Oil & Gas, ending the session the Index increased by 15.3pts…