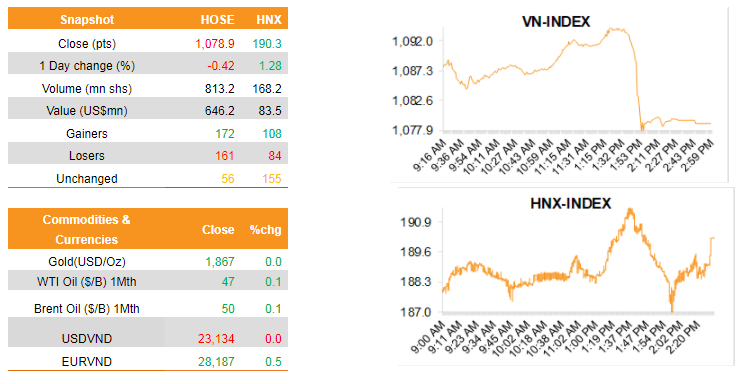 Oil fell for a third day as a report pointing to an increase in U.S. crude stockpiles worsened sentiment in a market already on edge over the discovery of a potentially faster-spreading mutation of Covid-19 in the U.K. Futures in New York dropped toward US$46/barrel and are down around 5% this week. The American Petroleum Institute said U.S. crude inventories rose by 2.7m barrels last week, according to people familiar with the data. That would be the second weekly increase in three if confirmed by official figures due later on Wednesday. A suggestion by President Donald Trump that he might not sign a stimulus bill into law also weighed on financial markets. (Bloomberg)

Any move by the US to impose tariffs on Vietnamese goods would hurt bilateral trade ties, the Ministry of Industry and Trade (MoIT) said. The ministry made the comment after Reuters reported that the US Department of Commerce is to continue imposing tariffs on Vietnamese goods from December based on the accusation of the Southeast Asian country manipulating its currency. Vietnam regretted the US Trade Representative (USTR)’s decision on October 2 to launch investigation under Act 1974’s section 301 into Vietnam’s currency and timber at a time when the two nations are enjoying fruitful relations across diplomacy, culture, economy and trade. Right after the USTR decided to initiate the investigation, Vietnam told the US side that it stood ready to cooperate during the investigation, and set up a working group to work with relevant partners in the US. Representatives from the State Bank of Vietnam are scheduled to hold a bilateral consultation with the US side late this month as agreed before, and it is extremely important for the two sides to maintain dialogue at the moment. Vietnam hopes that the US will take an objective view during the investigation into Vietnam’s policies and management so as not to affect the bilateral relations and efforts to boost cooperation between the two countries and their businesses, the ministry said. In case the USTR unilaterally pushes forward the imposition of duty on Vietnamese goods, the business community, producers and consumers of both countries will be the hardest hit. On the part of Vietnam, enterprises will lose confidence in doing business with their US partners, thus possibly resulting in a decline in the import of US materials and technology which can lead to a reverse of the rising trend in imports from the US over the past several years. (Vietnamnet.vn)

Market commentary: The VN-INDEX fell 0.9% as selling pressure dominated late trading The VN-INDEX began the week by falling 10.8pts in Monday ‘s session as several market pillars lost ground in late trading . After a significant drop in the…

Market commentary: The VN-INDEX down to the lowest point since July 2021 The VN-INDEX continued suffering a significant drop of 56.1 pts, as 197 stocks were covered in blue hue. Concerns rising as negative information about inflation increased above expectation…