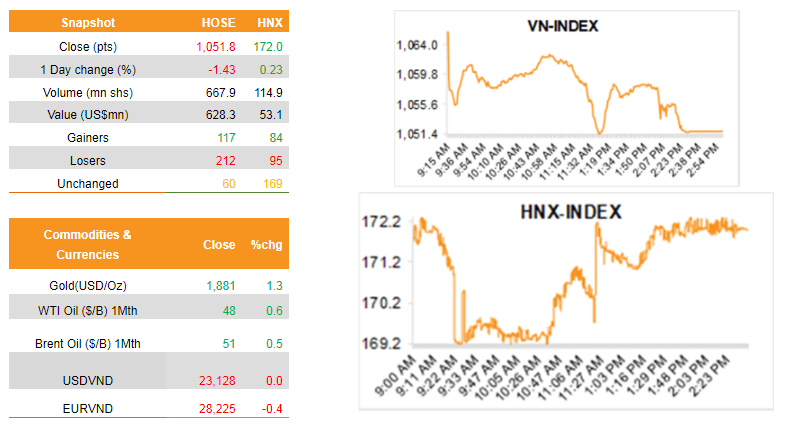 Oil extended gains from the highest settlement in almost 10 months after American crude stockpiles declined more than expected and as U.S. lawmakers edged closer toward a new stimulus agreement. Futures in New York rose above US$48 a barrel on Thursday after adding 2.7% over the past three sessions. Crude inventories dropped by 3.14m barrels last week, more than the median estimate in a Bloomberg survey. Gasoline stockpiles, however, gained for a fifth week, signaling weaker fuel demand. (Bloomberg)

Given abundant liquidity and low demand for credit, banks are offering attractive loans during the year-end period. Many banks in Vietnam are offering loans with low interest rates in an attempt to meet their respective year-end credit goals amid a lack of demand for capital during the Covid-19 crisis. Customers applying for this package would be entitled for a preferential rate from 5% per annum for loans with maturity under six months and a 5.5% rate for loans from six to 12 months (0.5 percentage points cut applicable to all terms). Over the past two months, credit growth averaged 1.2% per month, nearly double the growth rate recorded in the first nine months of the year. As of late September, Vietnam’s credit growth stood at 6.09%, but that of October and November hit 2.37%, higher than the average monthly growth rate in 2019. The market is expecting the 5th policy rate cut this year from the SBV to ensure the economy reaches its growth target of 2.5-3% (Vietnamnet.vn)

Market commentary: The VN-INDEX fell 0.9% as selling pressure dominated late trading The VN-INDEX began the week by falling 10.8pts in Monday ‘s session as several market pillars lost ground in late trading . After a significant drop in the…